Gas Pedal to Back-Pedal – The Second Century of Auckland Transport -- available now as a paperback from this website, Amazon, and Ingram Spark or as an Ebook from Amazon and Kobo Books - follow the links.

Waka Paddle to Gas Pedal – The First Century of Auckland Transport – first published October 2016 - a reformatted 3rd Edition republished January 2020 - available as a paperback from this website and Amazon, and as an EBook from Amazon and Kobo Books. Just follow the links. 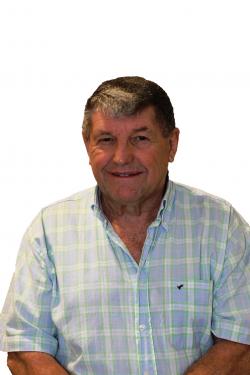 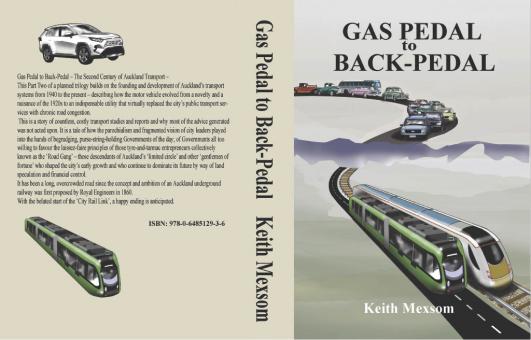 Gas Pedal to Back-Pedal – The Second Century of Auckland Transport –

This Part Two of a planned trilogy builds on the founding and development of Auckland’s transport systems from 1940 to the present – describing how the motor vehicle evolved from a novelty and a nuisance of the 1920s to an indispensable utility that virtually replaced the city’s public transport services with chronic road congestion.

This is a story of countless, costly transport studies and reports and why most of the advice generated was not acted upon. It is a tale of how the parochialism and fragmented vision of city leaders played into the hands of begrudging, purse-string-holding Governments of the day; of Governments all too willing to favour the laissez-faire principles of those tyre-and-tarmac entrepreneurs collectively known as the ‘Road Gang’ – those descendants of Auckland’s ‘limited circle’ and other ‘gentlemen of fortune’ who shaped the city’s early growth and who continue to dominate its future by way of land speculation and financial control.

It has been a long, overcrowded road since the concept and ambition of an Auckland underground railway was first proposed by Royal Engineers in 1860.

With the belated start of the ‘City Rail Link’, a happy ending is anticipated. 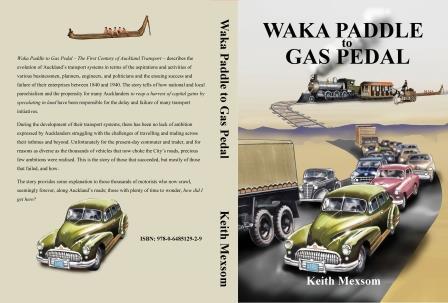 Waka Paddle to Gas Pedal - The First Century of Auckland Transport
Waka Paddle to Gas Pedal – The First Century of Auckland Transport – describes the evolution of Auckland’s transport systems in terms of the aspirations and activities of various businessmen, planners, engineers, and politicians and the ensuing success and failure of their enterprises between 1840 and 1940. The story tells of how national and local parochialism and the propensity for many Aucklanders to reap a harvest of capital gains by speculating in land have been responsible for the delay and failure of many transport initiatives. During the development of their various transport systems, there has been no lack of ambition expressed by Aucklanders struggling with the challenges of travelling and trading across their isthmus and beyond. Unfortunately for the present-day commuter and trader, and for reasons as diverse as the thousands of vehicles that now choke the City’s roads, precious few ambitions were realised. This is the story of those that succeeded, but mostly of those that failed, and how. The story provides some explanation to those thousands of motorists who now crawl, seemingly forever, along Auckland’s roads; those with plenty of time to ponder, ‘how did I get here?’
Read more
Created with Pub Site
Created with Pub Site